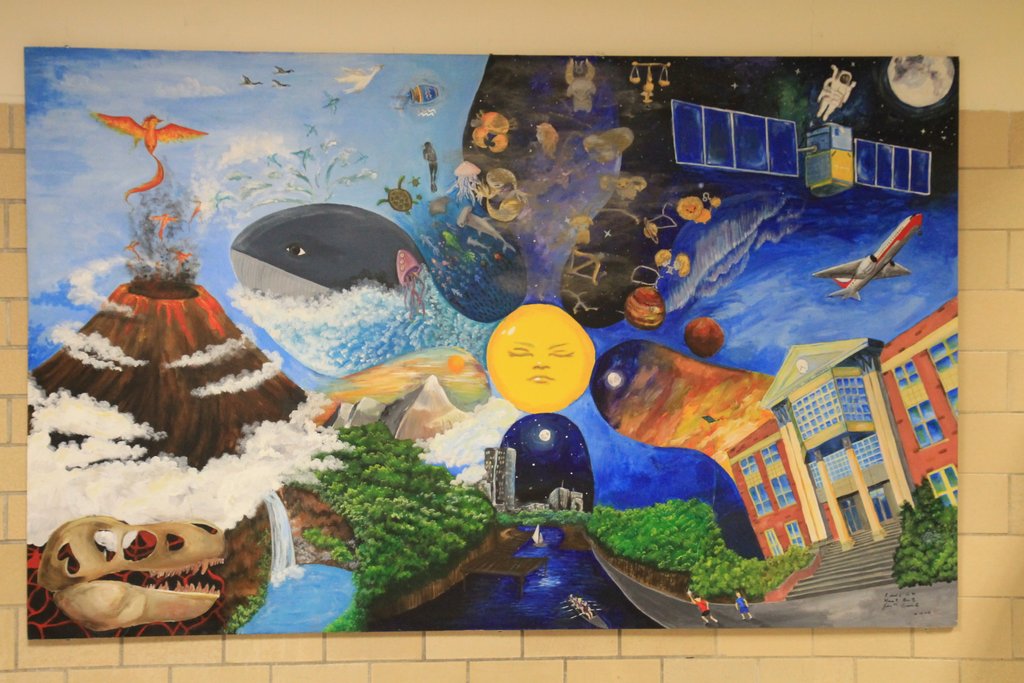 Bulletin boards filled with club advertisements, application notices and event posters line the hallways of the high school. But one wall, near the library on the second floor, is unique: A painted mural hangs there, filled with vibrant colors and a variety of images such as Boston, sea life, space and the high school.

The mural, which has a theme of unity in the world, started as an assignment for Richard Lee, Class of ‘15, and escalated into a large scale project involving multiple students.

According to Lee, the idea for the mural came from an open-ended final project for the high school’s public speaking class.

“I wasn’t sure what to do for my senior project, so I was talking to Mr. Fischer about it and I brought up the fact that I was in art classes since freshman year and when I mentioned that to him he suggested painting a mural for the school,” Lee said.

According to Lee, an obstacle he faced making the mural was that he could not create one alone. Lee said that he sought out other students that had experience in art or murals: class of ‘15 alumns Eri Montano, Julia Marusyk, Emma Gallion, Marco Rodriguez and senior Ben Batchelder. The next step was to make a detailed plan and get it approved by Hal Mason.

“I had to convince Mason fully that I was going to be able to do it because the previous mural project fell apart before,” Lee said.

According to Lee, the artists then decided on a general topic for the mural:  the concept of unity in nature.

“The whole thing is supposed to be the connection between everything.  All the organisms on Earth and everything in general,” Rodriguez said.

According to Lee, with help from their art teacher Donna Sartanowicz, the group had to determine how they were going to include its many parts in a single, cohesive design.

“We had to figure out how we were going to put all these different elements into the painting,” Lee said  “trying to figure out what worked well and stuff like that. It was just a back and forth talk, calling out and figuring out what composition worked best.”

According to Montano, the last step was finally painting the full-scale mural, which was completed after the artists had graduated.

“We couldn’t finish by the last day of school so Richard and I stayed for an extra month or a little more than that,” Montano said. “The other people couldn’t come because it was summer vacation.”

According to Lee, putting such a large amount of time into the project was difficult yet rewarding.

“I am proud of it because now it’s hung near the library and, like I said before, it’s obviously not an easy project,” Lee said.  “There’s a lot of dedication and work that went into it but, by finishing it, it felt like overcoming a great task. It was very fulfilling.”

According to Fischer, Lee’s project accomplished what the assignment set out to do: creating something that has an impact on the community.

“I wanted them to have an experience where they did something, rather than just wrote something or presented to the class,” Fischer said. “So I thought it was pretty successful.”

According to Montano, the mural was a way for her to leave some of her art at the high school.

“I’m happy that, in the school, a part of me and a part of my work, everything I loved, is in it, and people can appreciate it,” Montano said.